How does zero grazing for dairy cows measure up?

Climatic conditions, whether too wet or too dry, are often the deciding factors that persuade dairy farmers to use zero grazing as a management tool.

If the country is too hot, cows might be affected by heat stress. Zero grazing is a possible solution. Likewise, if the climate is too wet in a region, grazing cows could do a lot of damage, leaving zero grazing as the only option. That is part of the dilemma many farmers face when deciding which feeding method is best suited to the conditions of their farms.

As the term suggests, zero grazing is where grass is harvested in the field and transported to farmyards to be fed fresh to housed cattle each day.

There are a number of other reasons for carrying out zero grazing on a dairy farm. For example, farms may have blocks of grazing land in different areas, making it difficult to walk cows long distances to get to them.

Another reason is that there could be too many cows in the herd to walk them all at once to fields. Fresh grass can also boost milk quantity and quality when fed to housed cows during summer.

As grass is the cheapest form of feed for a dairy herd, zero grazing could be a better option when other feed costs increase – depending on the cost of harvesting and hauling the grass to the cows, of course.

Whatever the reason, zero grazing is becoming very popular on many dairy farms across the world, but could feeding silage instead be a better option?

As it may be difficult to maintain a sward at the optimum quality for zero grazing throughout the season, AFBI asked how cows would perform if offered silage produced from a sward at the same stage of growth as is normally harvested for zero grazing. Offering very high-quality silage, instead of zero grazing, could have a number of possible advantages, including reducing the need for harvesting to approximately once every 4 weeks compared to daily for zero-grazing systems.

ALSO READ: How do dairy breeds perform on pasture?
A look at the latest findings on which breeds perform best on pasture as average global temperatures rise and the number of extreme heat days increases. Read more…

Silage production is more weather dependent, and ensiling young leafy herbage can be challenging, especially later in the season. The study was conducted over 12 weeks between June and September in 2020. Fresh grass for zero grazing was cut daily and offered to a group of 18 mid-lactation dairy cows. Grass for silage production was cut once per week, from the same sward where zero grazing took place. 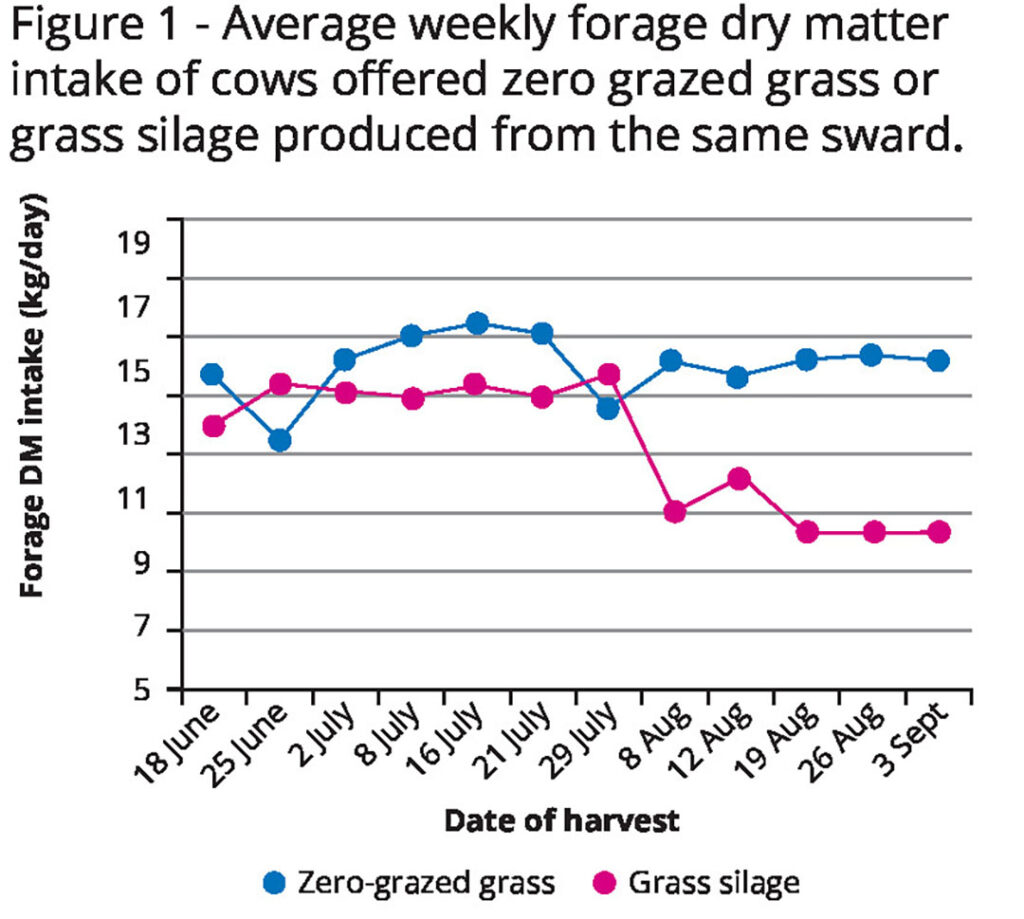 Weather permitting, grass was tedded to facilitate wilting, with a target DM at ensiling of 25-30%. Grass was ensiled in round bales with no additive applied at ensiling.

Following a 5-week storage period, silage was offered to a second similar group of 18 cows for 12 weeks. Cows in both groups were offered 8 kg concentrate per day via an out-of-parlour feeding system.

The zero-grazed grass had an average DM content of 15.6%, while the grass silage had an average DM content of 27.3%. The silage had a slightly lower crude protein content than the zero-grazed grass, reflecting loss of protein during ensilage. However, both forages had a similar metabolisable energy and fibre content, indicating that both were harvested at a similar stage of maturity.

Intakes of zero-grazed grass were higher than intakes of grass silage, with intakes of silage produced between 30 July and 3 September being especially low, reflecting the challenges of ensiling leafy herbage later in the season.

Milk yields followed a similar trend to silage intakes, being relatively unaffected between treatments earlier in the season, but then decreasing more rapidly with the silage treatment later in the season.

ALSO READ: Quality feed for healthy heifers in the tropics
Farmers in the tropics should commit enough time and resources to rearing their own replacement heifers, says Australian livestock specialist and author Dr John Moran. He says that because the animal is not producing anything saleable, farmers tend not to put too much emphasis on this part of their farm. Read more…

While milk fat content was unaffected by the forage type offered, the types of fat in the milk differed. For example, cows offered zero-grazed grass produced milk with higher concentrations of ‘healthy’ fats (monounsaturated and polyunsaturated fats) than those offered grass silage.

In addition, the concentration of conjugated linoleic acid, a fat believed to have anticarcinogenic properties, was higher in milk from cows offered zero-grazed grass. 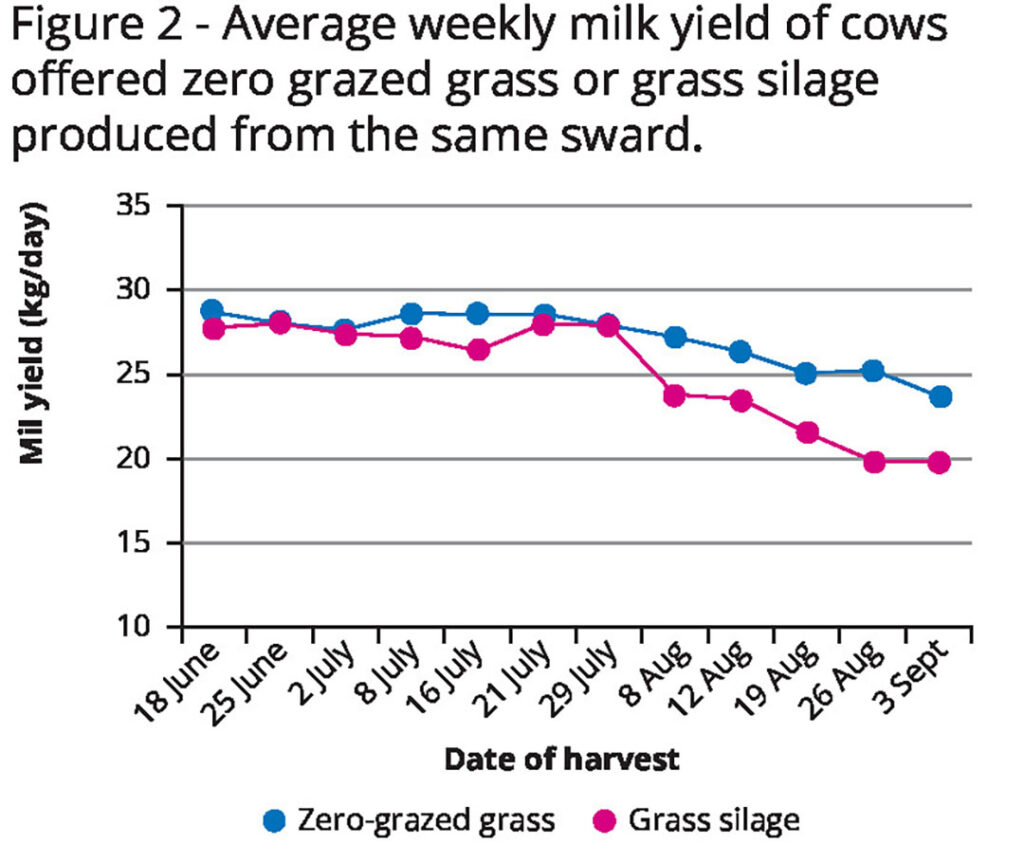 The differences in intakes and milk yields were particularly apparent later in the season, during August and September, which is likely to reflect challenges of ensiling herbage at this time.

Given the current cost of fuel and concentrate feeds, optimising the inclusion of grazed grass in dairy cow diets offers the lowest cost strategy by which to produce milk.

AFBI recognised that many farmers continue to demonstrate that well-managed grazing systems can sustain high levels of both physical and economic performance.

However, it did say systems with a major focus on grazing are no longer practised on many farms. In these situations the current study has demonstrated that offering zero-grazed grass increased forage DM intakes, milk yield and milk fat plus protein yield, compared to grass silage prepared from the same sward at the same growth stage.

How the changing climate is affecting hay production

How do dairy breeds perform on pasture?