The buzz word in many industries around the world is ‘sustainability’ by making their operations ‘net zero’. But just as the masses realise that they shouldn’t use more resources and emit more pollutants, forward-thinkers are getting to grips with the idea that ‘net zero’ isn’t good enough – we should be aiming for ‘net positive’.

It was one of the main mantras in the life of the late Dr Pearse Lyons: ‘Don’t get it right. Get it going’. And the latest edition of the Alltech One Ideas conference carried on in this spirit.

Mark Lyons: “My father was right! It’s not about perfectionism, it’s about progress. If we change the lens and the way we look at things, we can change the way we think.”

The only way of thinking is to think restorative, reparative, regenerative, and that is what we call ‘net positive’.

In exchanging their ideas, the conference speakers surely painted a new perspective on sustainability and on the steps beyond that. It was former Unilever CEO, Paul Polman, who shared his point of view in which direction the world should move. “‘I need to be sustainable,’ that’s ‘net zero’. But what does sustainable mean? No harm. It’s very noble to do. But ‘sustainable’ means, ‘I keep the status quo of what is currently happening. I sustain it’. And that’s not good enough anymore. A little less bad is still bad. The only way of thinking is to think restorative, reparative, regenerative, and that is what we call ‘net positive’.”

He continued: “Net positive is not about doing less harm. It’s about doing more good.” According to Polman, a change needs to happen well beyond the scale of the Industrial Revolution. Increasingly, CEOs are required to be broader social leaders and to partner up within and beyond the industry level. Many CEOs are struggling to make change — and that is normal. The good news, however, is that the greatest challenges also present the greatest business opportunities. “It really is about making a business model where you can show that you profit from solving the world’s problems, not creating them,” advised Polman. “And when you can honestly answer the question, ‘Is the world better off because your business is in it?’”

“We are at the point confirmed by study after study where the cost of not acting is becoming higher than the cost of acting,” said Polman, “which actually makes it an enormous economic opportunity to create this greener, more inclusive, more resilient future and not go back to the past where we came from, which, frankly, had run out of steam.”

Lyons concluded: “We are truly at the interface of 2 big ideas: nourishing the present and the preservation of the future. Reducing is not enough; we have to do something different. Our belief is that agriculture has the greatest positive potential to influence the future of our planet that can provide nutrition for all and help rural communities to thrive and replenish our planet’s resources.”

One of the ways that agriculture can have a major impact on restoring and conserving the environment is through carbon sequestration, a concept explained by Vaughn Holder, Alltech ruminant research group director. He introduced the audience to an Alltech research alliance called Archbold Expeditions. Based at the 10,000-acre Buck Island Ranch station in Florida, this research monitors land, nutrient and pollution inputs and outputs to evaluate experimental methodologies and modeling techniques for estimating carbon and nutrient fluxes on working cattle operations.

Vaughn revealed that the data shows us that by implementing pasture management practices, agriculture is in a unique position where it can both provide the food resources that the world population needs while at the same time engaging in actions that will help conserve and restore the planet. In fact, he stated that by focusing on feed and growth efficiency strategies and carbon sequestration management strategies on grazed lands, we could reduce greenhouse gases by over 50%. “Our ability to manipulate it is going to become more important,” Vaughn explained. “No one else is positioned in the way that we are to do this.”

Echoing Vaughn’s message of the importance of conserving the world in which we live, Nikki Putnam Badding, managing director and chief dietitian of Acutia, focused on expanding this theme to the world population. “Sustainability does not begin and end with environmental impact,” she explained. “It actually means that we are taking care of the health of the planet and the people who share it.”

This is of increasing importance as population growth puts extra pressure on our resources. Setting a table for 10 billion people by 2060 needs 70% more food. An impossible challenge? Heather White, author of ‘One Green Thing’ knows that it’s the individual actions that lead to a culture shift towards solutions. ‘’Every generation stands on the shoulders of the past and it is safe to say that we are our ancestors’ wildest dream. We have the technology and knowledge to make change happen, we just have to keep asking ourselves where we want to stand 30 years from now. What will our legacy be? With that mindset, instead of carrying on, on past principles, the possibilities are endless.’’ 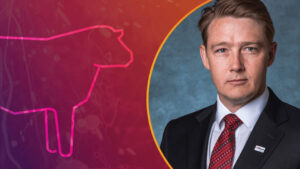 During the Alltech ONE conference in Kentucky, USA, Dr Vaughn Holder, Alltech ruminant research group director, discussed how important livestock is in converting by-products to meat and milk for humans to eat.
Dr Holder examined food security and how the protein sufficiency of countries was an important measurement tool indicating if there was enough protein to sustain the population.
An interesting fact delivered by the speaker was when discussing protein types. Holder said: “Now look at where the protein sources are. You’ve got tofu and eggs and farmed fish, poultry, pork, and soy milk being about the same. Grains and milk and cheese are about the same level of greenhouse gas production. When you go into these extensive systems where we are using large, forage-based production agriculture, you are going to have higher greenhouse gases just because of the nature of those fermentations.”
But Holder’s point was that the animals on these larger systems are utilising feedstuffs that the rest of that production system cannot use. He said: “The dairy and the beef industries are using large quantities of by-products. They are contributing to food security by converting things that we can’t eat or won’t eat into things that we can eat.”
The differential between animal protein and plant protein was also stressed. Holder made the argument that the digestibility and the amino acid composition of plant-based crops was not very good for humans. “The average milking dairy cow in the United States eats 12 kgs of by-products each day. About 8kg of dry matter every day. On average, 320 g of by-product per kg of milk produced. There are a lot of by-products going through dairy cows in the United States.”
In the end, the gist of Holder’s presentation was that the dairy cow is the ultimate recycling machine converting fibre and poor quality protein sources to meat and milk that are more suitable for human consumption.
Exploring global commitments to reduce methane emissions 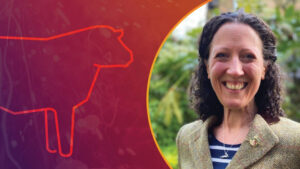 Let’s face it, the current levels of methane produced by our livestock industries are not sustainable going forward, but what action can farmers really take to reduce them? That was exactly the dilemma highlighted by livestock sustainability consultant, Jude Capper, during her presentation at the Alltech ONE conference.
Capper’s research focuses on sustainability of ruminant production systems with projects related to greenhouse gas emissions for beef production and climate footprints of smallholder farming and the impacts of livestock health and welfare and sustainability. Although focusing on beef production, the key take-home messages delivered by Capper are equally as relevant to dairy farming.
First up, Capper insisted that cutting herd sizes was not the modus operandi to reducing methane levels. She went on to define sustainability as a balance between environmental responsibility, economic viability, and social acceptability. Some of the ideas floated by Capper to reduce methane included improving efficiency and productivity to generate positive gains.
She said: “So if we’re going to make a set amount of milk or meat, and if we improve productivity in terms of improving growth rate in growing animals, improving meat yields per animal in terms of meat animals or, indeed, improving milk yield per cow, to make that set amount of milk or meat, we need fewer total livestock or/and less total time, depending on how we do it. If we improve that productivity, we can cut the carbon footprint in terms of the greenhouse gas emissions, but we also need less land, less water, and less fuel per unit of milk or meat. And it should come at a lower economic cost to the producer.”
Capper concluded with some food for thought encouraging everyone to remember that different global regions have different demands from livestock. “Many of the least productive and least efficient livestock systems in the world are in areas where livestock are absolutely crucial in terms of survival. It becomes very dangerous when we say let’s just get rid of cows, for example, because they give us so many benefits, both to us in the higher income countries, but even more so in the low and middle income countries. “Instead of saying let’s cut cow numbers, let’s look on a regional basis about what can we do.”
Transition to a successful lactation cycle 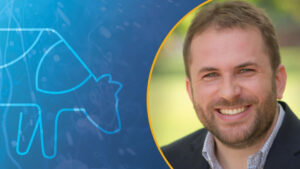 Decisions made by dairy farmers on management of cows through transition periods can play a vital role on the success of future lactations. These influencing traits were discussed at the Alltech ONE conference by Dr Eduardo Ribeiro, an associate professor in the Department of Animal Biosciences at the University of Guelph.
First Ribeiro explained that for the ideal transition period, a cow should have a dry period of approximately 40-50 days, a moderate body condition score, have a single calf without any problems, and maintain a good appetite. He later went on to highlight how postpartum clinical diseases such as retained placenta, metritis, mastitis, lameness, digestive and respiratory problems affected production.
He said: “The incidence of clinical diseases is around 50% during the 305 day lactation. But most of those cases are occurring early in lactation. So by 60 days in milk, approximately 40% of the cows will have at least 1 clinical disease, and by the end of the third week, by 21 days in milk, 30% of the herd will have at least 1 clinical disease.”
Ribeiro added that although most cases can be treated successfully, the cows won’t have the same performance in the next lactation as she would have without having that disease. Prevention of these diseases in the first place was the key to ensuring healthy cows and lactations in the future, the professor said.
“And that can be done in a multitude of ways,” said Ribeiro. “It can be through genetic selection of the animals that perhaps are less susceptible to disease or more resilient. It could be an investment of infrastructure and providing more comfort and less stress for cows during transition. Or it can be in management in general, which might including simple things like feedback management, or body condition score monitoring.”
Alltech ONE Conference returns next year – see details here.
Co-author:
Chris McCullough

​The Netherlands: Nitrogen should be slashed 70% in key areas