The power of scale in the dairy industry

Based on the analysis of more than 300 dairy companies in Western Europe, it is apparent that size is the way to go in the European dairy industry. With an average EBIT of 3.7% of net sales in 2020, large dairy companies (>€500 million in net sales) generated higher margins than their smaller competitors (2.5%) during the pandemic.

This highlights the benefits of the more balanced portfolio and presence across channels that larger dairy companies have in comparison to smaller companies and allowed dairy giants like Royal FrieslandCampina, Arla, and Glanbia to partly switch production from foodservice products to the retail segment in a time where restaurants were closed.

These benefits are not exclusive to a pandemic-affected market. Between 2015 and 2019, larger dairy companies consistently generated higher margins than smaller companies, with EBIT levels at 3.1% and 2.6% of net sales, respectively. Efficiency gains reduce costs relative to sales and the direct access to raw milk most large dairy companies have allowed to better play into milk price developments.

Furthermore, the effect of losing input volume, which is likely given environmental regulations rolled out across the EU, is less profound for larger companies as production is spread out over multiple plants and a lower utilisation at one plant can be compensated for in other plants.

Aside from a higher level of control over milk price developments, the scale of large dairy cooperatives and corporations allows them to exert more control over price developments of both their own products and non-milk input costs. This will be needed in the coming period of cost increases where cost hedging and the outcome of price negotiations with customers will prove pivotal for profits.

As supply chains continued to be disrupted due to the pandemic throughout 2021, the Russian invasion of Ukraine constituted a next blow to global logistics, and energy and commodity prices. The direct impact of the war on EU dairy exports is relatively limited as exports from the EU to Russia were already decimated after trade barriers imposed after the annexation of Crimea and exports to Ukraine and Belarus are at marginal levels: the export value of the EU to the 3 countries combined was 0.9% of total EU dairy exports. The main effects of the war will be felt through energy and commodity prices, which puts larger scale dairy producers at an advantage.

The first advantage lies in the capability for hedging purchasing contracts that larger companies have. Due to their scale they have more resources to assess market conditions and more purchasing power to negotiate contracts.

This can be a substantial advantage in a time where energy prices are increasing by triple digits and transport prices are higher than ever before. To put this in perspective, Royal FrieslandCampina spent €2.00 on energy and €5.53 on transport for every 100kg of raw milk processed in 2021. If the cooperative incurred the same energy cost increase as is projected for Dutch households (86%, CBS 2022), and the full 30% price increase of diesel was to be calculated into its transport costs, the cooperative would see the costs of energy and transport combined increase with €3.36/100kg. That money would have to come out of the pockets of farmers or consumers, so any cost-reducing measures such as hedging energy and transport contracts greatly improve the competitiveness of the producers.

Despite hedging, it is likely that costs will increase for dairy companies. Aside from the fact that it is difficult to fully offset the current price increases with hedging, milk prices are at an all-time high and inflation is rising. These costs will be have to passed on to customers, and this puts larger companies at an advantage again. Their scale and spread of sales across customers and channels enhances the negotiation power of dairy giants, as exemplified by Nestlé’s suspension of shipments to the largest supermarket in the Netherlands as the proposed price increases were not accepted. Smaller players often can’t afford to lose a large retailer as a client and will accept the terms faster, slashing margins.

Further shake-out to be expected

As rising costs and a likely reduction of input volumes reinforce the economies of scale that larger dairy companies already had, a further shakeout in the European dairy industry is to be expected. An example of this trend is found in the recent acquisition of Belgian fresh and UHT dairy producer Olympia Dairy by Royal A-Ware Food Group. Olympia Dairy was losing raw milk volume and saw margins decline to the point that losses were incurred (% EBIT 2020: -4.1%), but by joining the Royal A-Ware Food Group, synergy advantages can be achieved. With record milk prices, increasing input costs, and regulatory pressure on milk volumes, more of these consolidating acquisitions are to be expected in the European dairy industry.

For the full analysis, download the Trend Report on the European dairy industry (for free). Discussed topics include:
– The effects of COVID-19 on growth, margins and investments.
– The fastest growing and most profitable companies in the coronavirus year, 2020.
– The financial health of companies.
– Investment levels and their impact on growth and margins. 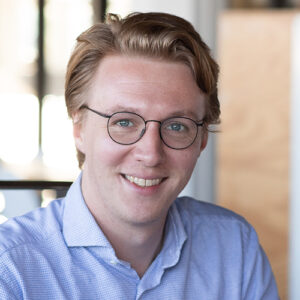