Who will win the dairy carbon-neutrality race?

Thousands of dairy farms worldwide have worked to reduce carbon emissions over the last few years, if not for much longer, but only 4 have made a public commitment to being carbon neutral by a given date. The farm that’s first across the finish line is sure to get global attention, and inspire the dairy industry across the planet to achieve further carbon emissions reductions. The race is on! Here are the contenders.

A broad international timeline was put forth in mid-2021 at the 22nd Dairy Conference of the International Farm Comparison Network. Attendees concluded that widespread carbon-neutral dairy farming by 2050 is possible, and the “Net Zero – Pathways to Low-Carbon Dairy” initiative was launched.

Before we look at the self-imposed deadlines and progress of our 4 contenders, let’s review the broad strokes of how dairy farms are coming ever closer to carbon neutrality and what may impede or accelerate the reaching of this milestone.

Lowering emissions of methane on dairy farms is critical because over the long term, methane emissions are more than 85 times worse than CO2 emissions in terms of global warming. There are 2 sources of emissions on dairy farms of this very intense greenhouse gas (GHG): cow burps (“enteric” methane) and manure.

Enteric methane emissions can be reduced by up to 95% through feeding cattle supplements of red seaweed.

For putting a halt to methane emissions from manure, biodigesters are critical. The bacteria in the vat digest the manure and produce methane, which is collected and cleaned. It’s then burned in generators (emitting CO2) to create electricity and heat. The nutrient-rich digestate, applied to fields, can also reduce the amount of inorganic fertiliser needed for crop or pasture growth; this helps reduce GHG emissions because fertiliser production requires large amounts of energy.

Together, red seaweed and biodigesters can reduce total methane emissions on a dairy farm by over 90%.

Biomethane can also be used to directly power tractors and other farm vehicles. In September 2021, at the Farming for Clean Air Show in the UK, New Holland’s new T6 180 methane-powered tractor was demonstrated. The methane came from the digester at Park Farm, a commercial research farm owned by the University of Cambridge, which hosted the show.

Together, red seaweed and biodigesters can reduce total methane emissions on a dairy farm by over 90%.

Some people consider carbon taxes to be an impediment to progress towards carbon neutrality on farms of all kinds, including dairy farms. That is, if farmers are paying more for fuel with a carbon tax surcharge, as they do in Canada, they have less money to invest in direct emissions-reducing technologies and initiatives on their farms.

However, farmers in various countries may also benefit from government funding schemes and cost-share programmes that support the adoption of carbon-reducing technologies.

Although they are used widely across many industries, carbon credits to offset carbon emissions are not being used by any of the 4 dairy farms contending to be the first to reach carbon neutrality.

It’s interesting to note that on 10 March 2022, the well-known US-based Organic Valley cooperative launched a carbon “insetting” programme, supporting the use of on-farm carbon reduction strategies by its member farmers to reach overall cooperative carbon neutrality without carbon offsets.

Organic Valley is one of the world’s largest organic consumer brands and represents approximately 1,700 farmers in 34 US states, Canada, Australia and the UK.

COWS AND CLIMATE | From the environment and emissions to welfare and feed. Many factors play an important role in how to better manage dairy cows in order to farm sustainably. Here we look at everything from ammonia to carbon emissions and methane. Read more…

Obviously, farms in warmer locations around the world have an advantage over those in colder climates in reaching carbon neutrality. In warmer climates, less or no heat is needed to keep buildings warm, less fuel is used to run farm equipment, pasture can be used year-round or for more months of the year, and so on. As you will see below, the contenders in this article are all located in warmer climates.

How carbon emissions and reductions are measured must be very similar for all farms in contention in order for any given farm to fairly claim someday to be carbon neutral.

Farms should be able to calculate in a similar way, for example, carbon emissions that existed before changes were made (baselines) and how they are being reduced. For example, how much emissions are slashed by using manure to replace some of the chemical fertiliser used on-farm to grow feed or pasture? Fertiliser has a very high carbon footprint, but manure kept in lagoons or spread on fields emits a large amount of methane.

At the same time, new technologies and methods are being developed to better measure reductions in GHG emissions on dairy farms, such as minimum tillage practices that reduce carbon loss from soil.

The contenders are shown below.

Farm: SmartFarm at Ellinbank in Victoria, Australia
Goal year to reach carbon neutrality: 2026
Owner: State government (Agriculture Victoria)
Feeding system: Pasture-based
Progress: Steady; digester to be added as well as additional solar power ­generation.
Methane: Currently, dairy waste deposited on the dairy yards and feedpad flows into the effluent ponds and accounts for about 19% of farm GHG emissions. Biodigester options are currently being evaluated and may potentially accept other farm and off-farm waste streams besides the farm’s cow manure. The digestate will reduce the amount of fertiliser needed for pasture growth, and the timing of application will be closely examined for how it may also reduce GHG emissions. Regarding enteric methane emissions, red seaweed is currently being trialled with preliminary data looking “very promising” with twice-day feeding (morning and evening milking). Enteric methane emissions account for just over 60% of GHG emissions. Other options to reduce enteric emissions include cow breeding, improved feed efficiency and improved lifetime performance. 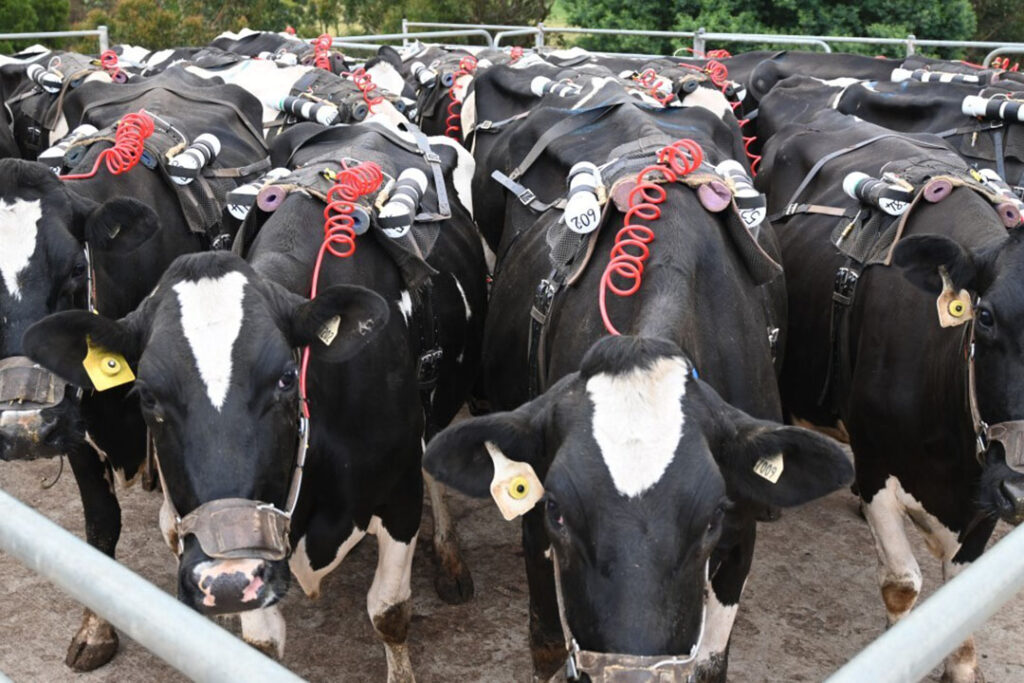 Renewable energy: About 110 kW of electricity from solar panels is being generated on the farm, displacing use of electricity from the national grid (primarily coal-powered generation). About 100 kW is used for general farm operation (coupled to a 100-kWh battery system that allows diversion of electricity as needed to meet high-demand times such as milking). The other 10 kWh is used with a battery to pump water from a spring-fed dam to supply water by gravity around the farm. The team hopes to at least double the amount of the farm’s solar power generation. Additional electricity will be generated from the biodigester.
Farm: Skimmelkrans Dairy Farm, South Africa
Goal year to reach carbon neutrality: 2023
Owner: Kuyler family (partners: Nestlé, academics)
Feeding system: Pasture-based
Progress: Ahead of schedule
Methane: Trials in collaboration with academia have been done to evaluate feed additives. Because cows are on pasture except for twice-day milking, not enough manure can be collected to operate a biodigester continuously. 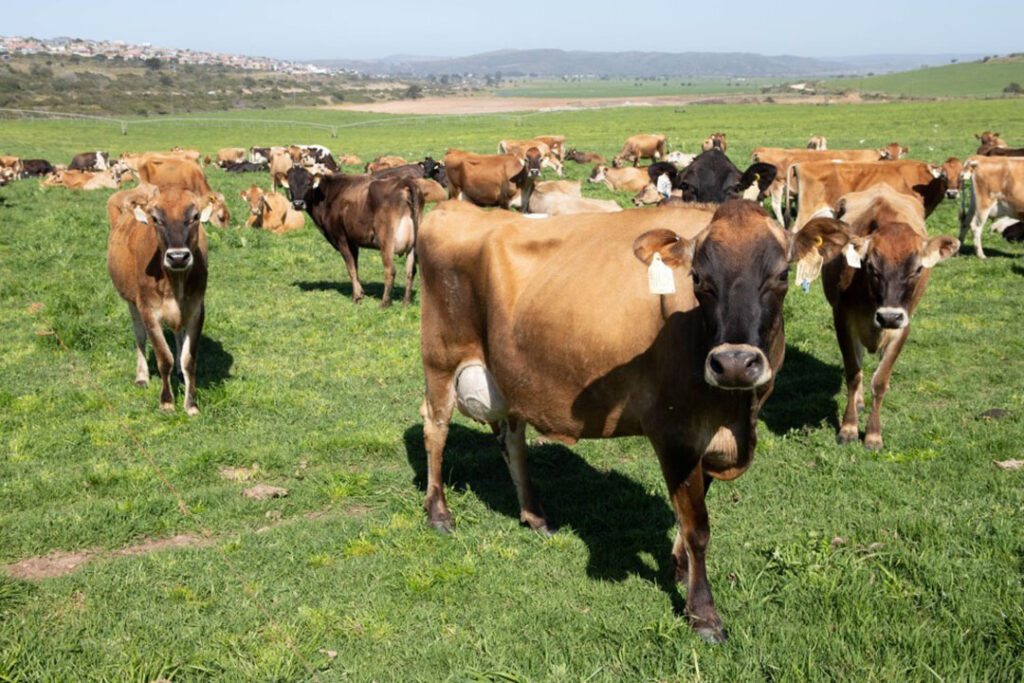 Renewable energy: Solar panels had achieved a 40% drop in conventional ­energy use by 2020. More panels are now being added. This power generation ­replaces grid electricity produced using fossil fuels. Other: Minimum tillage has played a large role in increasing soil carbon/health and has also contributed to lower farm fuel usage. Nitrogen fertiliser application needs on the pastures have been reduced significantly. A complete soil analysis will be done this year. Practices such as the roll-out of multispecies perennial pastures and applying proper techniques to encourage maximum pasture photosynthesis also reduce carbon emissions. There are 400 ha under irrigation and an additional 200 ha for feed production (80% feed produced on-farm with 20% purchased feed concentrate). For each tonne of bought-in feed that can be replaced by on-farm feed production, about 0.35 tonnes of CO2e emissions are reduced annually.
Farm: Farm Zero C at Shinagh Farm in County Cork, Ireland
Goal year to reach carbon neutrality: 2027
Owners: Shinagh Farm is owned by members of 4 West Cork farming co-operatives; The “Farm Zero C” project is operated by University College Dublin (led by Professor Kevin O’Connor) in partnership with dairy processor Carbery Group. Funding of € 2 million was awarded in 2021 to the project from the Science­ ­Foundation Ireland Future Innovator Prize Zero Emissions Challenge.
Feeding system: Pasture-based
Progress: By 2023, carbon footprint reduction of 40–50% is expected. 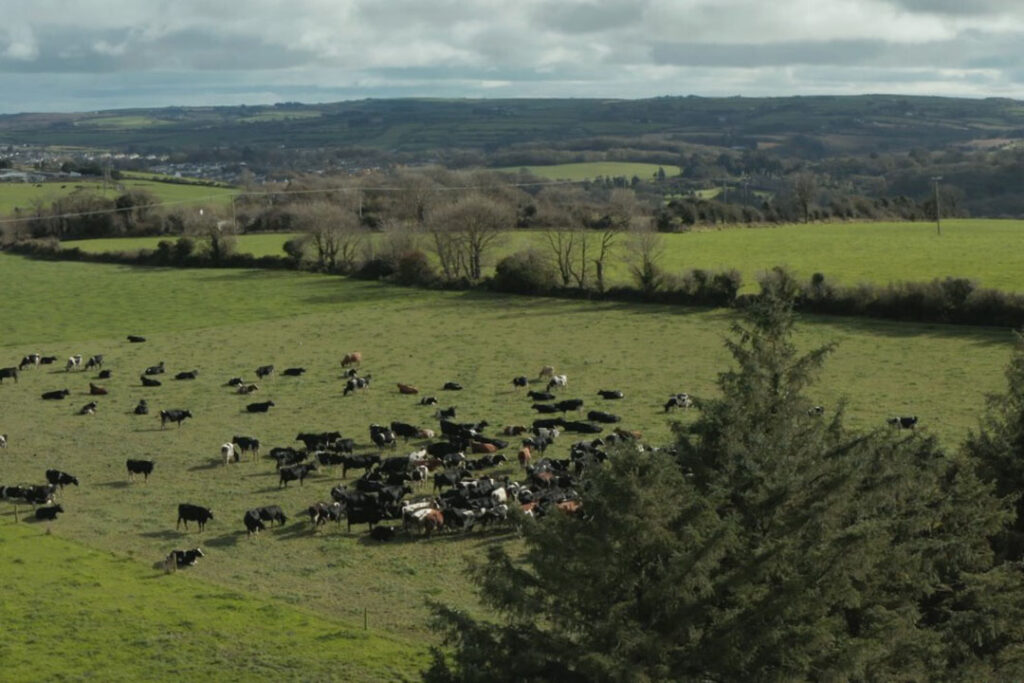 Renewable energy: Wind turbine in place. Solar panels are being installed on milking barn. This will replace power derived from oil combusted on site and grid electricity produced from fossil fuels. Methane reduction: Currently trialling various feed additives, including red seaweed. Also examining a combination of grass biorefining (to produce multiple products that can be used on-farm and sold off-farm) and a biodigester (to digest the residues and low-value by-product of grass biorefining).
Other: Increasing soil capacity to sequester carbon and using locally sourced feed.
Farm: Straus Dairy Farm in California, US
Goal year to reach carbon neutrality: 2023 (with all dairy farms that supply Straus Family Creamery to be carbon neutral by 2030).
Owner: Straus family
Feeding system: Organic pasture-based (US Department of Agriculture organic standards require grazing at least 120 days/year)
Progress: Very close to goal. State approval is pending for use of red seaweed as a feed supplement, considered “the last piece needed to reach the carbon-neutral goal”.
Methane: The farm tested red seaweed with 24 cows in 2021 in partnership with Blue Ocean; 5 tonnes CO2e equivalent were averted in seven weeks. The use of red seaweed has the potential to reduce farm carbon footprint annually by over 2,200 tonnes CO2e. The biodigester reduces manure methane emissions by 90% (annual reduction of 780 tonnes CO2e). 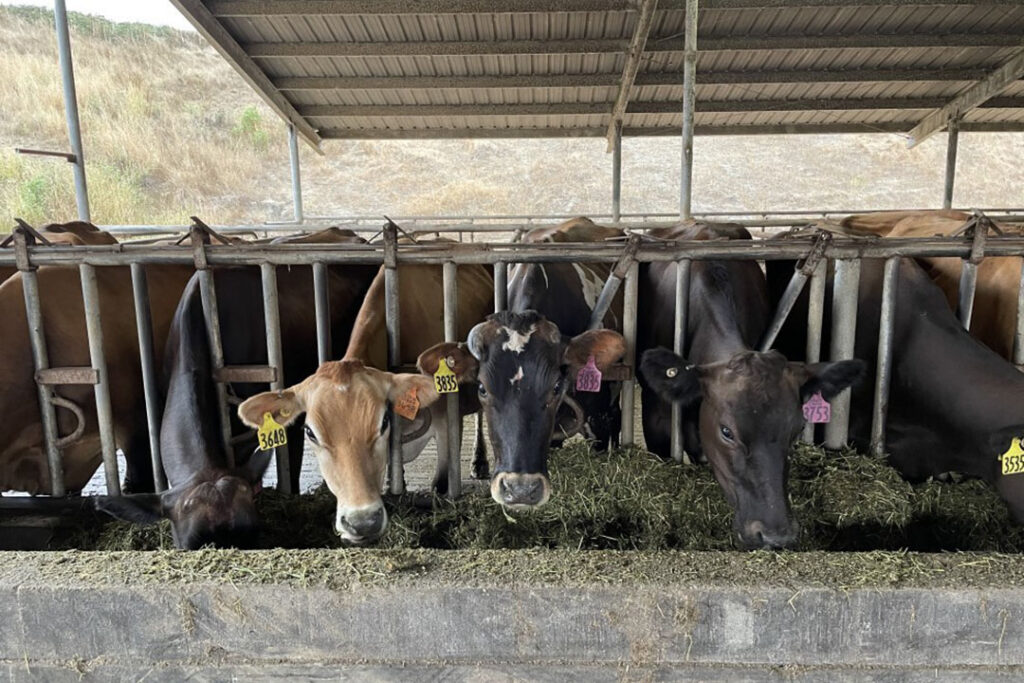 Renewable energy: The biodigester currently provides enough electricity to charge several electric vehicles, including a truck and a 544 John Deere industrial loader. (CEO Albert Straus debuted the first electric feed truck in the world in 2017.) A solar-powered water pump supplies remote troughs. Power from the grid in the area of the farm comes from wind, solar and hydroelectric.
Other: The farm’s current 20-year plan outlines a potential carbon reduction of 1,380 tonnes CO2e every year, between the digester and annual sequestration of up to 594 tonnes CO2e through regenerative land practices. These include applying compost to pasture, planting windbreaks and hedgerows, rotational grazing and planting perennial grasses.

EuroTier: A spotlight on dairy innovations