Heifer calving at the correct age

Dairy replacement heifers are probably the most important animals on a farm producing milk, but at the same time represent a huge cost to rear. It is therefore of vital importance that farmers manage their heifer rearing wisely and calve them around 24 months to achieve the most efficient financial gain from their investments.

In fact, research in the UK has shown that calving heifers at 24 months has the ability to increase the overall lifetime performance of the animal by 13%. Around the world, dairy farmers opt to run various dairy heifer replacement rates, but usually it is around 20-35%. This means for every 100 cows in the herd, the farm rears 20-35 heifer calves each year to act as replacement stock one day in the main herd.

It is estimated that the cost of rearing a dairy heifer up to 24 months is around € 1,500 to € 1,800, depending on the system. With this in mind, it is vital that farmers realise the best economic potential of the replacement heifer by planning her first calving at the correct age and weight. This rearing period of the animal’s life is all cost and creates no financial input. It has a direct effect on both the total cost of rearing and the time taken for each individual heifer to pay this investment back. Past studies have estimated that it takes, on average, one and a half lactations for the heifer to repay her investment in the rearing period, but this can range from 1 to 6 lactations. Replacement heifers are the main route to advance the genetic potential of the herd and in practice should be the best genetics on the farm.

Research by various agricultural bodies shows the economic, land sparing and carbon footprint benefits of rearing heifers to join the milking herd are best at 24 months of age. However, a significant proportion of heifers still first calve well beyond 24 months of age. Increasing the average age at first calving in a 100-cow herd from 25 to 28 months can increase the rearing cost by 18%, which equates to an extra cost of € 6,500 per year for a typical 100-cow dairy herd.

Some farmers are reluctant to calve their heifers for the first time at 24 months because they think it may affect the lifetime performance of that animal. Other fears are that it could affect heifers’ ability to compete with adult cows, mostly during feeding times. Research to address these concerns was carried out by AFBI and AHDB in the UK, which analysed over 7 million lactation records. The basis of this research included looking at the production of 2 million Holstein cows born after 2000 with age at first calving between 21 and 42 months. Cows were categorised based on their age at first calving into 3 levels: the low level had an age at first calving of between 21 and 24 months, the middle level between 24 and 30 months, and the high level between 30 and 42 months. 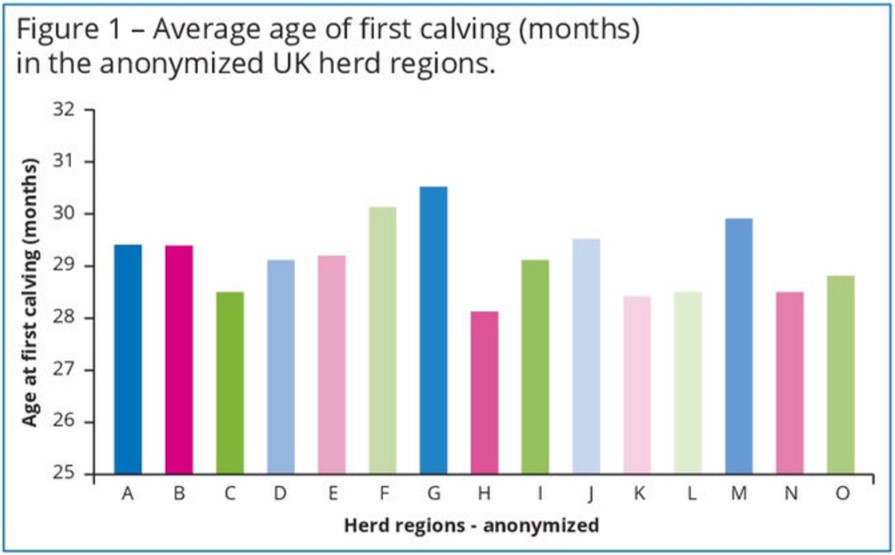 The average age at first calving of the cows assessed in Northern Ireland was found to be 28.5 months; however, it varied significantly across the regions of the UK (see Figure 1) with averages per region ranging from 28.1 to 30.5 months. Cows in the low level produced an average of 30,901 kg milk (energy corrected) in their lifetime, which is 1,137 kg and 3,570 kg more energy-corrected milk than the average for cows in the middle- and high-level categories (see Figure 2). For every extra month to the age of first calving, there is an average decrease of 16 days in the cow’s productive life (months in milk) and a decrease of 0.225 kg/day of daily (energy corrected) milk production. These results clearly highlight that calving at 24 months of age does not negatively affect future performance; rather, it improves overall lifetime milk production performance by up to 13%. 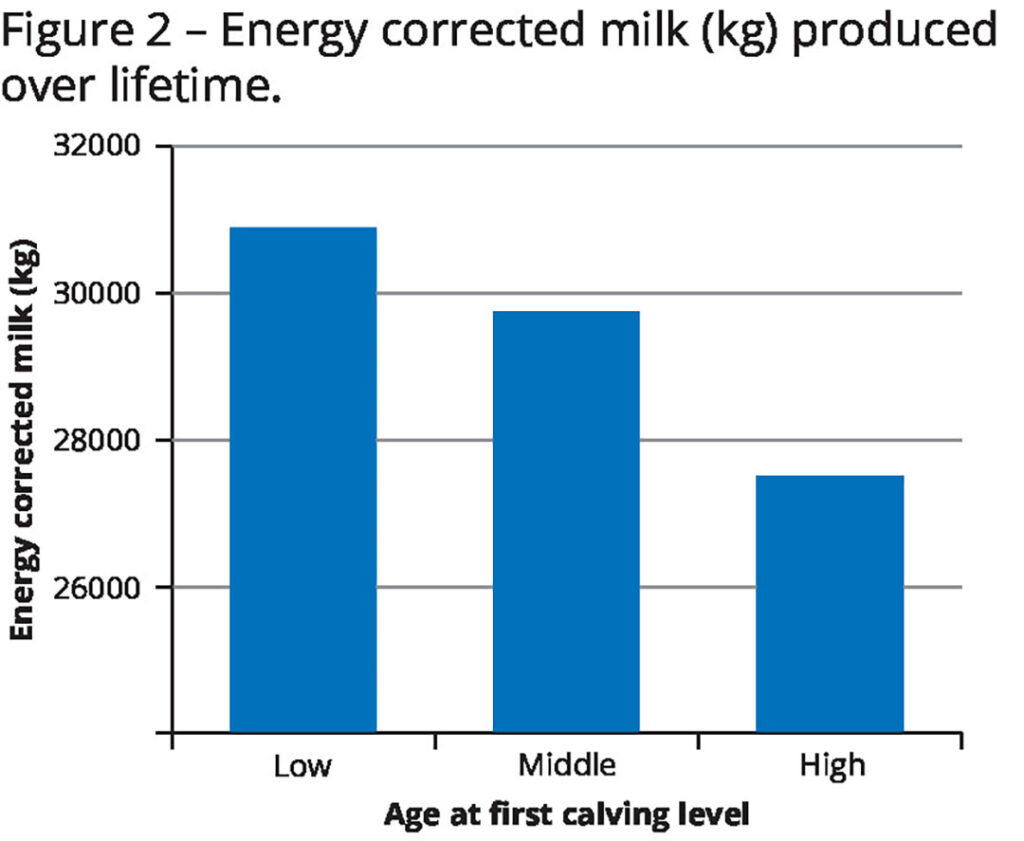 For dairy heifers to calve at the goal of 24 months, they must be inseminated at 15 months. Some dairy farmers opt for an easy calving beef breed to use on heifers for the first time, but most will choose to inseminate with an easy calving dairy sire with a good Economic Breeding Index (EBI), to help increase the expected profitability per lactation of the progeny of the sire. Using AI on heifers is efficient, as they are very fertile and are usually high genetic merit animals. Using AI can also help with good management of the herd, ensuring a more compact calving period compared to using a bull.

ALSO READ: Making heifers’ first-time parlour visit safe and stress-free
The routine of mature cows moving through a parlour is normally uneventful, but calf heifers venturing inside for their first milking experience can prove to be another story. Read more…

An animal with an EBI of € 200 means the progeny of that animal, on average, will yield € 200 more profit per lactation than the average progeny of an individual of EBI € 0, producing in a similar environment. Similarly, the progeny of the € 200 individual will yield € 50 more profit per lactation than the progeny of an individual with an EBI of € 150. To achieve a successful pregnancy, heifers must be well grown in order to cycle 2-3 times before they need to be inseminated at 15 months. The first few heats may be erratic and ovulation may not occur, after which, heifers should come into season every 21 days (range 18–24 days).

Just like cows, heifers are more fertile if they have shown a heat before they need to be inseminated, compared to those that are inseminated at their first heat. Puberty for a heifer begins when it is around 40% of its mature body weight. This weight must be reached by about 9 months of age so that heifers have 2-3 normal oestrus cycles before breeding at 55% of mature body weight.

Experts say that it is best to introduce newly calved heifers into the main herd in the evening time after milking as the older cows are calmer at this time and are fed. This means there should be less competition for feeding space, and heifers get a chance to become familiar with their new surroundings.