No matter where a farm is located, its size or housing facilities used, all dairies have one thing in common: replacement heifers represent future success. Therefore, getting these animals off to a good start and keeping them healthy must be a priority.

Raising high-quality heifers doesn’t happen by accident. Progressive dairy producers and their advisors spend a lot of time and attention developing cost-effective health and management protocols, training employees, exploring technological advances and learning more about the tools and methods that can help improve animal health and productivity and enhance the farm’s profitability.

Nutrition’s role through all stages of calf and heifer

The importance of proper nutrition throughout all stages of calf and heifer growth in achieving these goals cannot be overstated. As researchers at the University of Guelph in Guelph, Ontario, Canada, note, “Replacement heifer feeding programs must be designed to allow heifers to be bred efficiently, calve out by 24 months of age and produce to their maximum potential. To achieve this, heifers must be fed to grow at a high rate, while not becoming over-conditioned, as well as to remain healthy.” A growing body of research and on-farm evidence show that Refined Functional Carbohydrates™ (RFC™) serve as a means to increase heifer-rearing productivity and reduce disease incidence. This ultimately helps dairies provide that healthy foundation and better enable heifers to meet growth and performance goals. RFCs are the components harvested from yeast cells (S. cerevisiae) using specific enzymes during the manufacturing process to ensure a high level of bioavailability. This proprietary enzymatic hydrolysis yields: Mannan oligosaccharides (MOS), Beta glucans (1,3-1,6) and D-Mannose. These compounds are naturally present in all yeast cells, but are not readily bioavailable. The proprietary enzymatic hydrolysis affects bioavailability and functionality. Research shows that each RFC has a specific mode of action and outcome when fed to livestock. 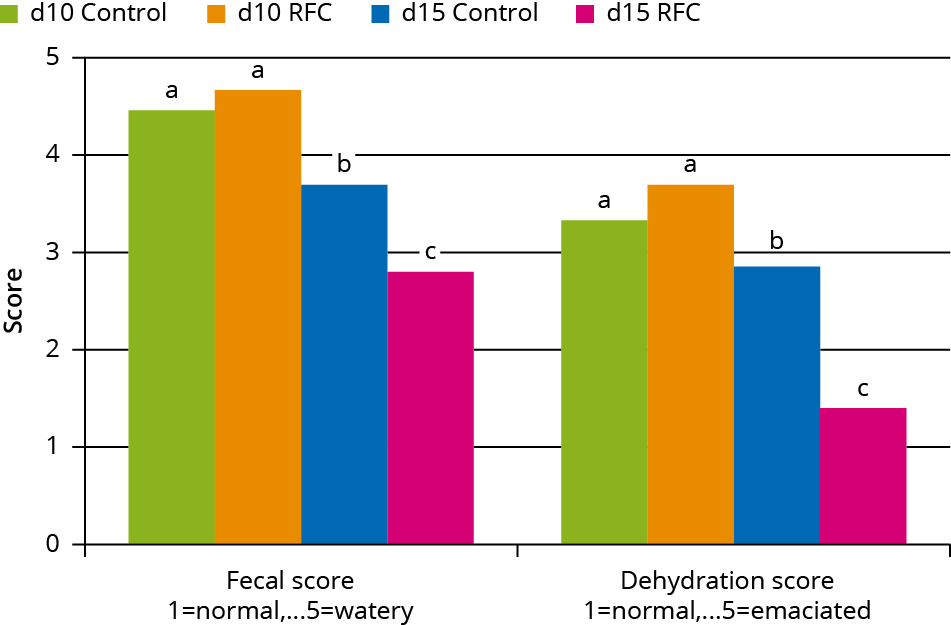 What do RFCs do?

RFCs are a non-antibiotic feed additive that can help provide a healthy foundation for dairy calf and heifer development. In essence, RFCs act as a prebiotic by feeding the beneficial bacteria of the intestine while blocking sites for attachment by pathogens. Adding RFCs to the calf’s milk or milk replacer from birth, and throughout the animal’s life cycle, can help maintain gut health and overall animal health, boosting immune response. Health issues happen, even at the best-managed dairies. For example, researchers at Ghent University in Belgium recently noted that the prevalence and incidence risk for neonatal calf diarrhoea (diarrhoea in calves aged one-month-old or younger) in dairy cattle herds has been reported to be 19.1% and 21.2% respectively. Research indicates that RFCs have been shown to reduce the incidence, severity and duration of cryptosporidiosis caused by Cryptosporidium parvum, a leading cause of scours in young calves. RFCs have also been shown to have activity against Eimeria, another scours-causing organism in other species. Since these pathogenic challenges are difficult to predict, RFC feeding can provide the initial defense when the challenges occur. In essence, they act as a first line of defense. The RFCs bind to the receptors of the Cryptosporidium protozoa (and other pathogens) and prevent them from attaching to the intestinal wall and causing disease. The organisms then pass harmlessly through the digestive system, helping to break their life cycle and helping to reduce the odds of reinfection. Research highlighted in the chart below (Figure 1) shows that calves fed RFCs recover faster than those not fed RFCs. In addition, RFCs can also bind to (agglutinate) some bacterial pathogens (Figure 2) and prevent colonisation of bovine intestinal cells by various types (serovars) of E. coli and Salmonella enterica. Since pathogens are found in every environment, setting calves up for success must be a key management focus. That means following good pen and feeding hygiene, and enhancing gut health.

Figure 2 – Effect of RFC on bacterial pathogens in vitro.

Likewise, RFCs help negate the negative effects of mycotoxins that sometimes occur in feed. While mycotoxins may not be of concern for preweaned calves, the odds are good that replacement heifers will be affected by them at some point in their life. Recent global surveys show that 75% or more of ration ingredients are contaminated by one or more mycotoxins. Mycotoxins are of concern because their presence can lead to lower feed intake, decreased nutrient utilisation, reduced gut health, immune suppression, poor growth and performance and secondary infections like diarrhoea. Just as with pathogens, RFCs bind to mycotoxins, like aflatoxin, and prevent them from being absorbed through the gut and into the blood circulation. The toxins then pass harmlessly through the digestive system and are excreted without negatively affecting animal performance.

Figure 3 – Effect of RFC on weight gain in calves.

The multifunctional nature of RFCs (reducing the effects of harmful pathogens, as well as toxins in feed) keeps the calves healthy and helps the calves partition energy to growth. This may lead to an improvement in calf growth and performance, offering dairies an excellent health-enhancing tool when developing a strategy for improved livestock production. Figure 3 shows that calves fed RFCs improved weight gain compared to the control groups. Ultimately, dairy producers have come to consider RFCs as a means to jump-start calves’ immunity in a way that provides numerous benefits to animal health, enhanced performance and increased productivity.

References are available on request.

Successful supply of dairy-bred cows in the spotlight